Steven was by now an experienced thief and robber. Most of his selfconfidence actually came from the TFGun he once bought on a flea market. He thought it was a toy gun and wanted to use it at the local alcohol store as a first try. He aimed at the owner and yelled at him to give him all the money. The owner was experienced and immediately saw it was a toy gun. "Guy, get out of here quick, or I'll call the cop" he said cool. Steven was afraid and was about to leave when he acted like a kid and acted as if he was shooting him. A pink flash came out of the gun and hit the owner who immediately transformed into a female 47 year old version of himself. The name tag on his tight top suddenly said Denise instead of David.
From that day on Steven knew it was the others who should be afraid of him. The word spread fast and most store owners, banks and normal people who he wanted to rob let him do his job otherwise they knew what would happen.
Often enough though he had to demonstrate his powers and he experimented with his gun. He found out that he just has to think of a picture or a female job, name or anything like that and the guy would change the person fitting to what he thought. Some months ago he was robbing a gas station and quickly looked at the board with the magazine covers. As the 19 year old cashier refused to give him the money first he shot at him while still having the picture of Katy Perry in his head. He also found out that it is a one-way ticket. The gun would never work twice on someone since he tried to change the Katy Perry double back but it wouldn't work.
The newspapers next day said "Started his shift as 19 year old Jason and got hom as Katy Perrys twin - read her story" and people started to get pissed.
From that day on Steven was greeted by more and more resistance during his jobs and the police always tried harder to take his gun away.
So when he tried to rob a big bank downtown as one of his last jobs the situation quickly got out of control. People wouldn't listen to him and he already heard the sirens. He panicked and decided to grab a young boy as a hostage. "Leave me alone, or I think of a grandma!" he yelled and took the boy with him out in the park. He was surrounded by many people and a group of 5 police men ran towards him. "Put that gun down and give up" they yelled holding up their real guns.
"Yeah? I think I know a place were you should work instead of the police, I was there yesterday" with that he quickly shot at the officers who immediately turned into busty strippers in police uniforms. "Much better huh? He laughed" as the new strippers fell on their butts due to their shifted balance and their high heels.
He spotted some girls filming everything on their smartphones. "Fucking bitches" he said and shot them. Shortly after that there were four female dogs running out.
One man tried to be brave and approached Steven and his hostage form the right but he saw him. A second later the pink beam hit him and the black man was a 10 year old girl with blonde pigtails.
"Ok, you all don't want to listen? Then I will show you what power I have." From that on he randomly shot at people and thought about something nice for them to transform into. A young woman that reminded him of his ex was instantly turned into a pig. A father was turned into his daugther and her daugther into her father. Two yelling punks were suddenly screaming in the voices of Kim Kardashian and Paris Hilton.
He spotted two men and aimed at them "you, you can be a hooker and you, why don't you look like your own mom" he said. Bad luck would have it that the beam accidently hit the glas front of the guys smartphone and the beam was reflected. The first one hit himself and the second one his hostage. 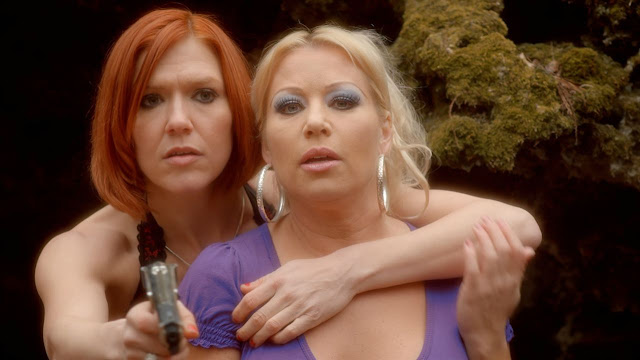 "No way, fuck!!" he screamed in his high pitched voice, looking at his slender hand with the red fingernails holding the gun. Immediately two other officers ran towards them and held his now weaker arm with the gun up in the sky. "Let go of the gun, whore!" yelled the cop and smiled dirty at Steven. "I'm sorry for you boy, but you can go back to your family".
Steven looked down at his clearly female body, wearing only a red-black top with alot of cleavage, showing off his fake double Ds, a short black leather skirt, fishnet stocking and pink platform hooker boots.
After 3 years in a women prison (the judges agreed that he got a fitting punishment already) Steven, now Stephanie, had no other opportunities to work in the business she gave herself.